Bio Sketch Format | How to Write a Biographical Sketch?

A Biographical Sketch is a short summary of someone’s life. It can be used to introduce someone to someone else or to describe their accomplishments. This blog post will discuss the basic of bio sketch format and provide some useful tips on how to write an impressive biographical sketch.

What is a Biographical Sketch?

A Biographical sketch (referred as Bio Sketch) is an overview of the life and work of a person, typically including information about their childhood, education, achievements, biographical details, and other important aspects of their life, usually written by someone else. 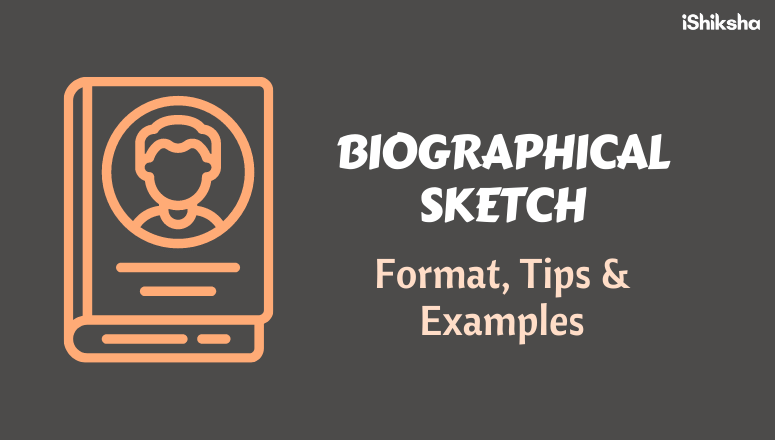 How to Write a Biographical Sketch?

To write a biographical sketch, you will need to include the basic facts about a person’s life, such as their date and place of birth, education, work history, and family. It should also provide some insight into the person’s personality and interests. While a biographical sketch can be as short as a paragraph, it is often half or one page long.

A biographical sketch should include the following information:

A general biographical sketch format consists of a set of details that include:

A biographical sketch is a short story about the life of an individual. It is used in reference to an author, musician, artist, historian, scientist, or any other person who has lived and worked.

Avul Pakir Jainulabdeen Abdul Kalam (15 October 1931 – 27 July 2015) was an Indian aerospace scientist who served as the 11th President of India from 2002 to 2007. He was born in a Tamil Muslim family in Rameswaram, Tamil Nadu, and studied physics and aerospace engineering.

He spent the next four decades as a scientist and science administrator, mainly at the Defence Research and Development Organisation (DRDO) and Indian Space Research Organisation (ISRO). He was intimately involved in India’s civilian space program and military missile development efforts.

He earned the nickname “Missile Man of India” for his work on developing ballistic missiles and launch vehicle technology. He also played a pivotal organizational, technical and political role in India’s Pokhran-II nuclear tests in 1998, the first since the original nuclear test by India in 1974.

Kalam was elected as the 11th President of India in 2002 with the support of the ruling Bharatiya Janata Party and the then-opposition Indian National Congress. Widely referred to as the “People’s President”, he returned to his civilian life of education, writing and public service after a single term. He received several prestigious awards, including the Bharat Ratna, India’s highest civilian honour.

Kalam was fondly known as the People’s President and referred to as the “Missile Man of India” due to his work in developing ballistic missiles and launch vehicle technology. He was also an accomplished author, having written several books, such as India 2020, Ignited Minds, Wings of Fire and Target 3 Billion.

He was also an inspirational speaker and was mainly known for his motivational messages to the youth of India. He was also a strong advocate of the modern education system and its integration with the culture of India. He passed away due to sudden cardiac arrest in 2015.

Stephen Hawking was one of the most renowned scientists of our time. He was born in Oxford, England, on January 8, 1942. When he was just eight years old, his family moved to St. Albans, Hertfordshire. Stephen Hawking began his schooling at the Byron House School in Highgate, London. He later attended St. Albans School, where he developed a passion for mathematics and physics.

In 1959, Stephen Hawking was accepted into Oxford University to study natural science. However, he soon realized that his true passion was physics. He transferred to the physics department and earned his Ph.D. in cosmology.

During his time at Oxford, Stephen Hawking made several important discoveries in the field of theoretical physics. In 1974, he published a paper on the nature of black holes. This work earned him a place as one of the leading experts on black holes.

In 1979, Stephen Hawking was appointed as the Lucasian Professor of Mathematics at the University of Cambridge. This is a position that was once held by Isaac Newton.

Throughout his career, Stephen Hawking made many important contributions to the field of physics. In 1988, he published his best-selling book, A Brief History of Time. This book explained complex theories in a way that was accessible to the general public.

On March 14, 2018, Stephen Hawking passed away at the age of 76. His legacy will continue to inspire scientists and laypeople for generations to come.

Sachin Tendulkar is a former Indian cricketer and a former captain of the Indian national team. He is widely regarded as one of the greatest batsmen of all time. He is the highest run-scorer and the most capped player in Test cricket history.

He is also the first batsman to score a double century in a One Day International. In 2002, he was the only Indian cricketer to be ranked among the top 10 players in the world by Wisden. Tendulkar has received many awards, including the Bharat Ratna, the highest civilian award in India.

Born on April 24, 1973, in Mumbai, Tendulkar began playing cricket at the age of eleven. He made his Test debut against Pakistan in November 1989 and One Day International debut in December 1989. He quickly established himself as one of the most talented batsmen in the world. He became the first Indian batsman to score a century in a Test match overseas and the youngest player to score a century in a Test match. He also holds the record for the most Test centuries and the most One Day International centuries.

Virat Kohli is an Indian cricket player who currently captains the Indian national team. He is a right-handed batsman and occasional right-arm medium-pace bowler. Kohli is regarded as one of the best batsmen in the world. He plays for the Royal Challengers Bangalore in the Indian Premier League and has been the team’s captain since 2013.

Kohli was born on November 5, 1988, in Delhi, India. His father, Prem Kohli, was a lawyer and his mother, Saroj Kohli, is a housewife. He has two siblings, a brother, Vikas, and a sister, Bhawna. Kohli was raised in Uttam Nagar and started playing cricket at a young age. He attended Vishal Bharati Public School and West Delhi Cricket Academy.

Kohli made his debut for the Indian national team in 2008 and has since played over 200 matches for the team. He has been a regular team member in all three formats of the game and is considered a key player in the Indian batting lineup. Kohli has scored over 10,000 runs in international cricket and is the second-fastest player to reach the milestone, behind only Sachin Tendulkar. He has also been named as the ICC ODI Player of the Year on three occasions (2012, 2017, 2018).

Kohli is married to Anushka Sharma, a Bollywood actress, and the couple has a daughter named Vamika Kohli.

Pusarla Venkata (PV) Sindhu is a professional badminton player from India. She is currently ranked as the second-best female player in the world by the Badminton World Federation. Sindhu has won many prestigious titles, including the BWF World Championships, the India Open, and the Syed Modi International Badminton Championships.

Born on July 5, 1995, in Hyderabad, Sindhu started playing badminton at a very young age. She was inspired by her father, who was a former volleyball player. Sindhu quickly rose through the ranks, winning several state and national level tournaments. She made her international debut in 2009 and won her first major title, the Malaysian Open, in 2013.

Sindhu is known for her aggressive play style and ability to play long rallies. She has a powerful backhand and is capable of executing difficult shots. Sindhu is also known for her mental toughness, which has helped her in many close matches.

Sindhu has inspired many young girls to take up badminton. She is a role model for athletes all over the world.

Rabindranath Tagore was a Bengali writer, poet, and philosopher. He was born in Calcutta, India, on May 7, 1861, into a wealthy and well-educated family. His father, Debendranath Tagore, was a leader of the Brahmo Samaj, a religious reform movement.

He began writing poetry at an early age, and his first collection was published when he was only 17. By the time he was in his twenties, Tagore had established himself as one of Bengal’s leading writers, and his work began to be translated into other languages.

In 1901, Tagore published his most famous work, Gitanjali, a collection of poems that won him the Nobel Prize for Literature in 1913. He is the only Asian writer to have been awarded the Nobel Prize.

Tagore was a prolific writer, and his poetry, novels, short stories, and essays are widely read in both Bengali and English. His work explores the themes of love, humanity, and spiritualism, and deep respect marks his writings for Indian culture and tradition. Tagore was also an accomplished painter and musician, and his compositions are popular throughout India.

Tagore’s ideas and work profoundly influenced the development of Indian thought, and he is often hailed as one of the country’s most influential thinkers. He died in 1941 at the age of 80.

2. What does a Biographical Sketch mean?

A biographical sketch is a short summary of a person’s life, typically written by someone else.

3. How to write a Biographical Sketch about yourself?

To write a biographical sketch about yourself, it is important to be honest, and to include as much relevant information as possible. Try to give a clear and concise overview of your life, and avoid including irrelevant or personal details.

Application for Section Change in School

Importance of Higher Education in India