Report Writing on Earthquake for Students

Earthquakes are natural disasters that can cause widespread destruction and loss of life. India is no stranger to earthquakes, with the country experiencing its fair share of seismic activity over the years. In this blog post, we will be exploring the topic of report writing on earthquakes.

We will look at the different types of earthquakes that can occur in the country, the importance of having an effective earthquake response plan in place, and some tips on how to write a comprehensive report on an earthquake. Whether you are a student, journalist, or simply someone interested in learning more about earthquakes, this blog post is sure to have something for you. 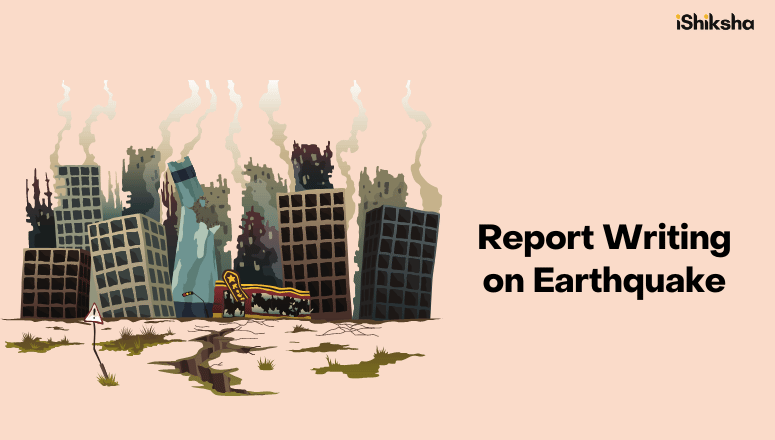 A powerful earthquake with a magnitude of 7.1 on the Richter scale struck the city of Dharamshala in the northern Indian state of Himachal Pradesh on the evening of September 23. The earthquake caused widespread damage and panic among residents. Many people were injured, and property was damaged.

The epicenter of the earthquake was in the Kangra district, just a few kilometers from Dharamshala. The tremors were felt over 400 kilometers away in Delhi, as well as in neighboring countries like Nepal and Pakistan.

The quake struck around 6:45 p.m. local time, causing damage to many buildings, roads, and essential utilities such as water and electricity throughout the city. When it happened, some people were at home, while others were out on the streets.

People rushed out of their homes and office buildings in fear as a result of the earthquake. Many people spent the night outside, unable to return inside. To deal with the disaster, emergency services were quickly mobilized, and rescue and relief operations were launched in the affected areas. The aftershocks caused significant damage as well, with buildings collapsing and roads becoming impassable. The death toll remains unknown, but it is expected to be high.

The death toll from the earthquake had risen to over 200 as of September 24, with over 1,000 people reported injured. As rescue efforts continued, the number of casualties was expected to rise further.

The earthquake caused significant damage to the city’s infrastructure, including the destruction or damage of many roads and bridges. Due to the quake, the city’s airport was also closed, causing flight disruptions.

The Indian government has announced that it will provide financial assistance to earthquake victims and has dispatched teams of National Disaster Response Force (NDRF) personnel to assist with rescue and relief efforts.

The earthquake was a major shock to the people of Dharamshala, who are still reeling from its aftermath. Many people are now homeless and in need of basic necessities such as food, water, and medical care.

In the aftermath of the earthquake, the people of Dharamshala banded together to assist those who were affected. Volunteers and community groups are working tirelessly to help and support those in need.

It is critical that the government and other organizations continue to help those affected by the earthquake. It will take time for the city to fully recover from the disaster, but with the help of the community and the efforts of rescue and relief teams, it will eventually recover.

Write a Report on Bhuj Earthquake

The Bhuj earthquake was a devastating natural disaster that occurred on January 26, 2001, in the state of Gujarat, India. The earthquake had a magnitude of 7.7 on the Richter scale and was one of the strongest earthquakes ever recorded in India. It struck at 8:46 a.m. local time and was centered near the town of Bhuj, which is located in the Kutch District of Gujarat.

The earthquake caused widespread damage and loss of life throughout the region. In Bhuj alone, more than 20,000 people were killed and another 167,000 were injured. The quake also destroyed over 400,000 homes and displaced over 15 lakh people.

The earthquake was caused by the movement of the Indian tectonic plate against the Eurasian plate. The plates are constantly moving, but they are usually separated by a layer of rock called the lithosphere. When the plates grind against each other, they can cause earthquakes. In the case of the Bhuj earthquake, the Indian plate was moving northward at a rate of about 4 centimeters per year. This movement caused a rupture in the lithosphere, which resulted in the earthquake.

The Indian government and international organizations provided relief and assistance to the affected communities. They provided food, water, shelter, and medical care to people in need. They also helped to rebuild homes, schools, and other infrastructure that was damaged in the earthquake.

The Bhuj earthquake was a devastating natural disaster that had a profound impact on the people and communities of Gujarat. It caused significant loss of life and property and disrupted economic activities in the region. But with help from the government and international groups, the communities that were hurt were able to get better and start over.

What Are Transferable Skills? – Importance & Examples

How To Write A Resignation Letter?

15 Best Jobs for Deaf People or Hard of Hearing