Report Writing on Train Accident: An accident involving a train can be extremely dangerous and the worst thing that can happen to anyone. It’s important that you write a report on the incident that accurately describes the events and explains how they could have been avoided. In this blog post, we will discuss the steps needed to write a report on a train accident and explain with a report writing format and an example!

What is a Report Writing?

Reports are written for different purposes. For example, you might write a report to give information about an incident.

Reports usually follow a standard format. They often start with an introduction, which gives an overview of the report’s main points. This is followed by a body containing the main information and a conclusion, which sums up the main points.

Regardless of their purpose, all reports share some common features. They should be clear, concise and well-organized. They should also be objective, which means they rarely contain personal opinions. 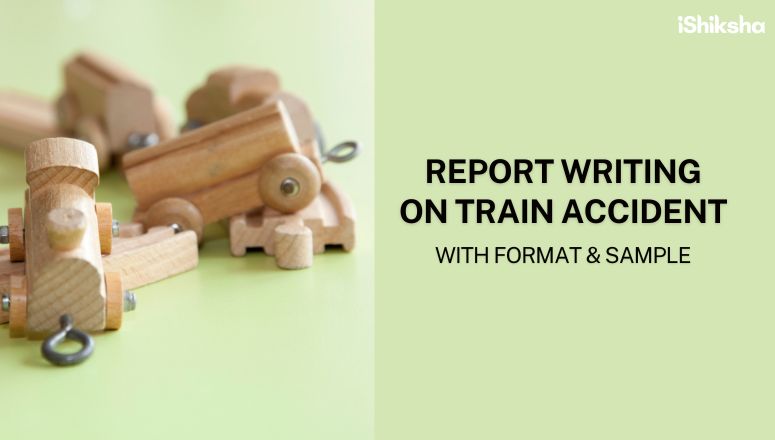 The government and other organizations can use the report writing on train accident to inform them about the causes of the accident. The insurance company can also use it to find out what happened during the accident.

The report writing on train accident is usually written by the police. The report’s author must gather information from witnesses, the injured people, and the police and other officials involved in the accident.

How to Write a Report on a Train Accident?

The report writing on the train accident is a difficult task because it requires the writer to get into the mind of the witnesses, the injured people, and the police.

The report’s writer must collect all the details about the accident and present them in an organized manner. In addition, the writer must use clear and precise words to write the report.

Before you start writing a report on a train accident, you need to gather all the pertinent information about the accident. This includes the date and time of the accident, the location, the names of any victims and witnesses, and a description of the accident itself. Once you have this information, you can begin writing your report.

You can follow this basic format of report writing –

1. Start with a Title

The title of the report should be something that will catch the reader’s attention.

2. Create a Title Page for Your Report

This should include the report’s name, the date it was written, and your name as the reporter. Next, you may create a table of contents so that readers can easily navigate your report.

3. Write an Executive Summary of the Report

This should be a brief overview of the report’s main points, including the cause of the accident and any recommendations for preventing future accidents.

4. Write a Detailed Description of the Accident

Include all of the information you gathered in your initial research, and be sure to describe the accident in clear, concise language.

5. Conclude Your Report with a Summary

You will need to conclude your report with a summary of your findings and any recommendations you may have. Be sure to proofread your report carefully before submitting it.

6. Include Your Thoughts on the Accident

In the end, you may include your thoughts on the situation that led to the accident and what you think can be done to prevent future accidents.

On Sunday morning of November 20, 2022, a speeding train derailed in Kanpur, Uttar Pradesh, killing dozens of passengers and injuring many more. The train was traveling from Delhi to Patna when it derailed near Pukhrayan, about 100 kilometers from Kanpur.

The accident occurred early in the morning, about 4:30 am, and the death toll is expected to rise as many passengers are still missing. A number of the injured are in critical condition.

A local police official said that 14 Sleeper bogies and 3 AC coaches had derailed, and Most of the victims were asleep when the train crashed into the platform at Pukhrayan Station.

Some passengers jumped off the train before it derailed, but many others remained trapped inside the wreckage. Railway officials said that they expect the death toll to climb.

“We have already recovered nearly 30 bodies from the site and many of the injured were rushed to nearby hospitals in Kanpur City. Some of the injured were in critical condition,” Kanpur Division Railway Police Officer Rajesh Kumar said. “Some of the bodies are very badly mutilated. We are hopeful we will be able to recover more.”

The train was reportedly moving at 200 kmph when it hit the platform. The speed limit on this section of track is 100 kmph. The driver did not slow down before entering the curve, and that caused a derailing.

Officials said, “The train was going at high speed through the curve. The driver did not reduce the speed or apply brakes and crashed into the platform. The engine driver has been arrested, and the driver’s cabin has been sealed.”

After some time, a rescue team reached the site, and they found the carriages had derailed and it was surrounded by a thick cloud of smoke. After the carriages were cleared, the bodies of the victims were retrieved from the train. At least 50 passengers were killed in the accident, and more than 100 were injured.

I think it was the driver’s fault for not stopping the train at the station. He should have slowed down the train. This is a dangerous situation for the driver. The train shouldn’t be allowed to run on the tracks; it was too fast and too late to slow down.

Indian railway authorities should take action to prevent such accidents from happening again. I think the driver should have taken some precautions before starting the train. He should have ensured that the brakes were working properly and that there was no problem with the track or other equipment.

There should have been a warning sign on the track saying that this was a slow-speed section of the track. The driver should have slowed down the train before getting into the section. He should have used the emergency brake. There are many ways in which the driver could have avoided this accident.

Here are 10 catchy headings on Train accident for report writing-

Conversation Between Teacher and Student in English

Health is Wealth Essay For Students In English

How To Write An Application To The Principal?

10 Best Jobs for the Blind People Working from Home